Below is a feature written and published by Stephen Dunn in the local Parish magazine:     Bowmer Bond Narrow Fabrics. A world Leading Mayfield Company It’s currently Mayfield’s largest employer and a world-renowned leader in its field, you see its products every single day but may not even know you’ve seen them, and yet […]

Below is a feature written and published by Stephen Dunn in the local Parish magazine:     Bowmer Bond Narrow Fabrics. A world Leading Mayfield Company It's currently Mayfield’s largest employer and a world-renowned leader in its field, you see its products every single day but may not even know you’ve seen them, and yet outside of those who work there, little is known about this outstanding manufacturer on our doorstep.  That company is Bowmer Bond occupying the mill at Hanging Bridge and maybe it’s because that mill is technically in Derbyshire and not Staffordshire (the river being the boundary) it is the reason why it has never featured large in the pages of this magazine before. So now is the time to change that and reveal all about a company that Mayfield should be very proud of.  So, what does Bowmer Bond make? Well, technically it makes Narrow Fabrics and Webbing, part of a tradition of weaving and cotton manufacturing in this area, the home of the first factories in the whole world. And by Narrow Fabrics we mean exactly that – it is fabric but in narrow tape-like strips. But more importantly, these narrow fabrics are very, very strong, can take enormous weight and are absolutely crucial for so many products we see around us every day. The next time you look at a large lorry with its big curtainwalls all neatly held down by a series of straps that stop the content spilling out, those straps are Bowmer Bond. The next time you meet a paramedic or a fireman you will find key parts of their uniform held together by Bowmer Bond material, and the equipment they use to save lives again works only because of Bowmer Bond materials. Should you be a pilot in the Air Force your life may well depend upon Bowmer Bond straps and fabrics built into your flight suit.  And then again, as you walk down any High Street and see bunting stretched across the rooftops celebrating 70 years of the Queen’s reign, again the bunting tape is Bowmer Bond.   So much from one company based here in Mayfield. The Bowmer Bond story began in 1795 when William Bond began his tape manufacturing business in Morrey, near Yoxall in Staffordshire.  His was one of the earliest such mills in the entire country, just 24 years after Richard Arkwright opened the first water-powered mill in the world at nearby Cromford.  50 years later they moved to a mill at Alrewas next to the Trent and Mersey canal and the new railway to the north of England provided perfect transport and distribution links. Business was doing so well that in 1865 the son of the founder buys the site of an older burnt-out mill at Hanging Bridge and builds a brand new mill.  It is a magnificent mill, built in the style of an Italian Renaissance palace worthy of the streets of Florence.  He calls it Alrewas Mill to commemorate his father’s old mill and calls the business 'Bond and Co'.  The name stays right up to the days of the telephone when the mill realises that people told ‘Welcome to Alrewas Mill’ on the phone would cause confusion with deliveries going to the wrong place. Only then was the mill officially called Hanging Bridge Mill. The increase in the use of tapes and narrow fabrics in Victorian businesses, homes and women’s clothing means demand is high and the business thrives, but there are also competitors and just a year after the mill was built at Hanging Bridge, John Bowmer founds another tape manufacturer, this time in Wirksworth. 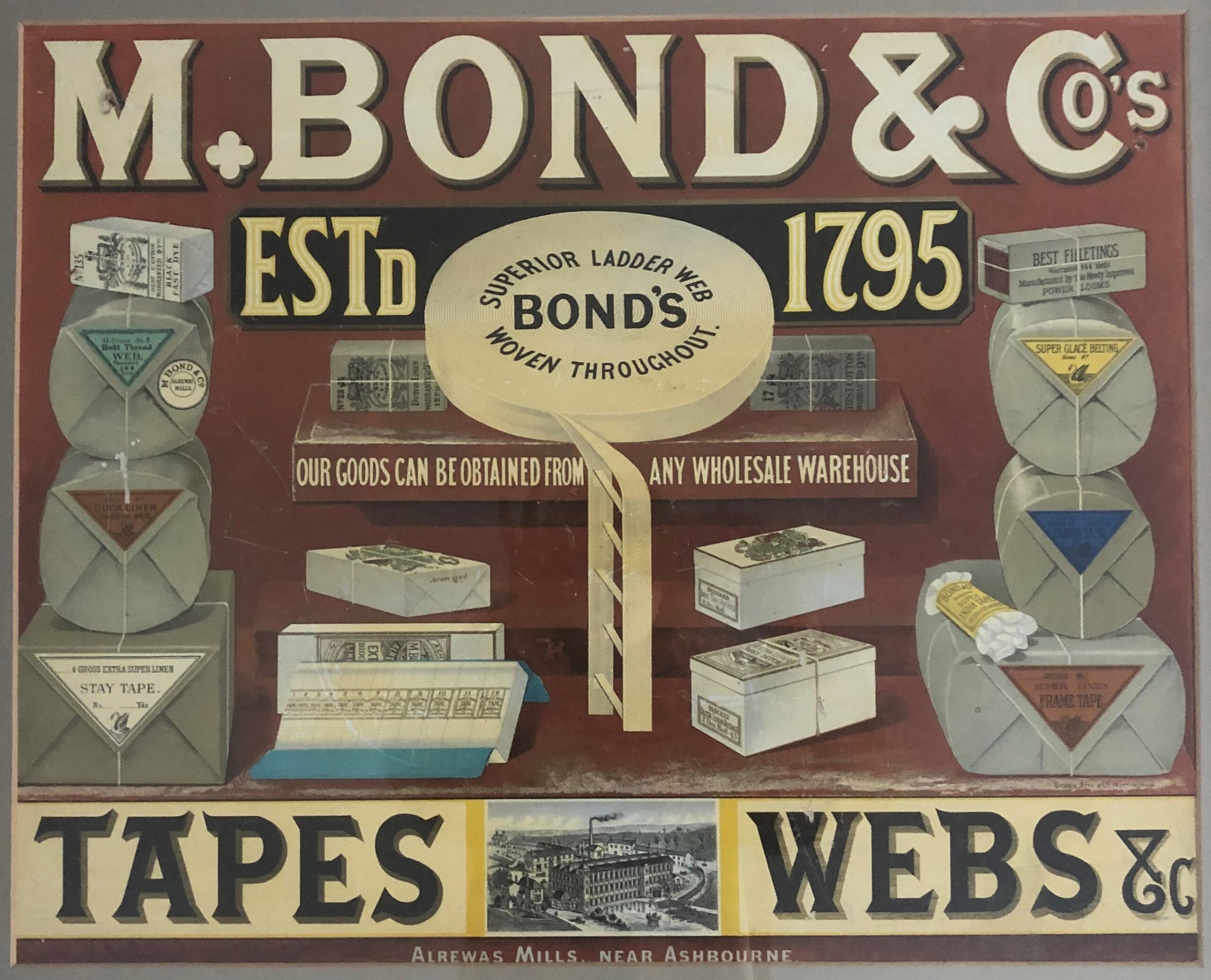 An advertising board for the company circa 1900 The market is big enough for both of them as Britain is the leading world manufacturer of all cotton fabrics at this point. The tapes, narrow fabrics and webbing the factory produces are sent all over the world, especially to all points of the British Empire. 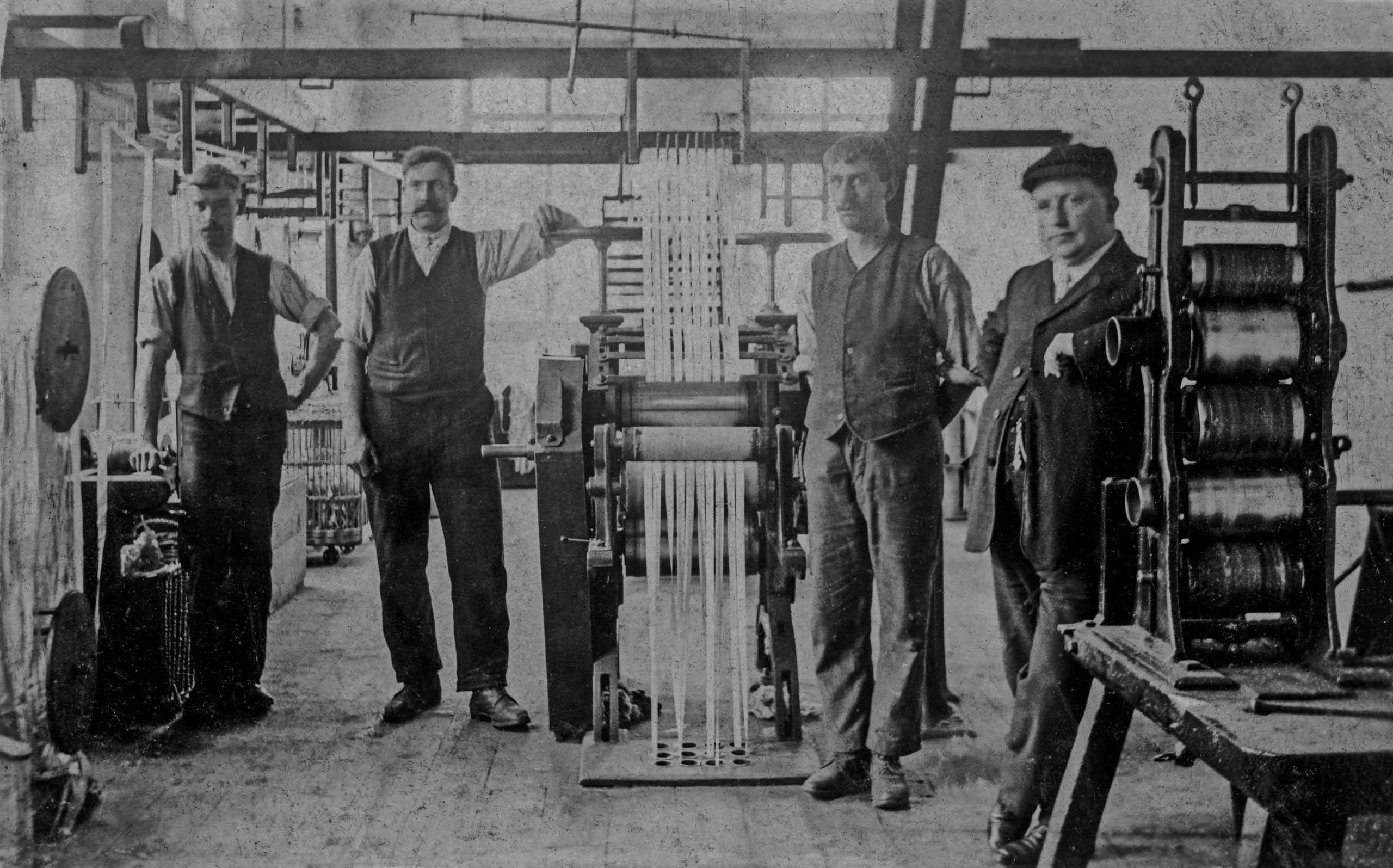 Workers in the Calender room 1914

The factory is relatively unique, committed to employing all members of the local community: men women, and of course in those days, children. Unlike many other cotton factories where the employees are virtually all women and children in order to cut costs, Bonds were different in that they encouraged strong family connections and was a good employer and people would stay for many years, often living in the company cottages built onsite next to the mill. The mill was built at Hanging Bridge to make use of waterpower and you can still see today where the river has been diverted to go into the old water wheels that powered all the machinery. In fact, waterpower was still the main power source right up until 1942 when electric motors were first brought in to power the looms. The mill even had its own gasometer with a boiler generating gas to be used in mill lighting and hot water for dyeing the fabric. The creation of Bowmer Bond, with the merging of Bond’s and Bowmer’s at Wirksworth, occurred quite recently, just 50 years ago. In 1972 when the Bond business was in some difficulty, Bowmer's offered to buy the company for £20,000, which was not a lot even then and in today's money is equivalent to £280,000, less than the price of a detached house in Mayfield. The purchase and merging of the two companies was an inspired idea and 50 years on the business is still growing and thriving with new products, new manufacturing techniques, supplying customers across the world and employing over 100 people, many from Mayfield itself. S.D.

Want to get in touch?

Contact our experts and see how we can help you.

Bowmer Bond, sitting on Mayfield’s doorstep and Mayfield’s largest employer, has always been a family firm and families have been...

Advantages of Webbing in Automotive Applications

There are many ancillary product options designed for high performance and maximum strength in automotive applications.  However, products made from...

Below is a feature written and published by Stephen Dunn in the local Parish magazine:     Bowmer Bond Narrow...

Great to see Bowmer Bond’s Secubond ® PVC-coated webbing in use during machine demonstrations on the Miller Weldmaster stand...

Be the first to hear our news, sign up to our newsletter

Sign up to our quarterly newsletter to get the latest news, blogs and insights from our company.

Want To Get In Touch?

Whatever your Narrow Fabric requirements, we are sure we can help.

A member of the Sales team will contact you.

You can find out more about which cookies we are using or switch them off in settings.

This website uses cookies so that we can provide you with the best user experience possible. Cookie information is stored in your browser and performs functions such as recognising you when you return to our website and helping our team to understand which sections of the website you find most interesting and useful.

Strictly Necessary Cookie should be enabled at all times so that we can save your preferences for cookie settings.

If you disable this cookie, we will not be able to save your preferences. This means that every time you visit this website you will need to enable or disable cookies again.

This website uses Google Analytics to collect anonymous information such as the number of visitors to the site, and the most popular pages.

Please enable Strictly Necessary Cookies first so that we can save your preferences!